The infamous mineshaft that is Plum Pudding is the first challenge of the Absa Cape Epic. It’s no piece of cake…

Now, a traditional Plum Pudding recipe calls for cinnamon, cloves, nutmeg and orange zest. The most spice after Sunday’s Absa Cape Epic curtain raiser on the slopes of Table Mountain came in the banter at the finish line. ‘How was your pudding?’

“It was more of a snotty, mud pie,” joked Travis Raath of Team Honeycomb C (216-2) about the Prologue’s Land Rover Technical Terrain. Travis and his partner, Slade Seely, finished at around 08:40am in a very respectable time of 01:07. “The first five step-downs we were able to get down quite nicely and then it just deteriorated,” Travis said, adding how stoked he was to have been able to get on the trails early without too many riders having gone through.

In prime conditions it takes an average rider around a minute to complete, it took Jordan Sarrou and Matt Beers of NinetyOne-songo-Specialized a lot less than that on their way to finishing in a time of 00:43:24.2 and claiming the first yellow leader jerseys of the unique event.

As did Sina Frei and Laura Stigger of NinetyOne-songo-Specialized, who showcased their XCO prowess by making short work of all the technical sections to cruise into the women’s orange leader jerseys. Mud-splattered by the finish, the pair were delighted with their efforts. “It was really tough out there today thanks to the weather, but we are used to those conditions from some of our recent XCO rides, so we handled it well,” said Stigger.

Located 16 kilometres into the Prologue, the first section of Land Rover Technical Terrain has a formidable reputation. Precipitous and dusty on the best of days, on a day that saw four seasons in the space of a few hours (and that, on the back of two days’ worth of rain) the surface was the consistency of cake batter. A recipe for thrills and spills. Wisely, many of the amateur riders chose to walk it, opting not to risk ruining the first Absa Cape Epic in 938 days, while others took their chances on the dual track downhill. Many ruing that choice or their chosen line ending in cartwheels, slip-slides and some spectacular dismounts. Fortunately, there were just a few scrapes and bruises and no serious injuries.

“I had about 5cm of mud on my tyres and tried to clear it by riding on the side, but just ended in the bush,” said Willem Viviers, of Life Healthcare (241) who finished with some battle wounds on his knee and shoulder but a huge smile on his face. “It was just about unrideable; the pros are really going to have their work cut-out for them.”

They didn’t, proving that you can have your Plum Pudding, and eat it. 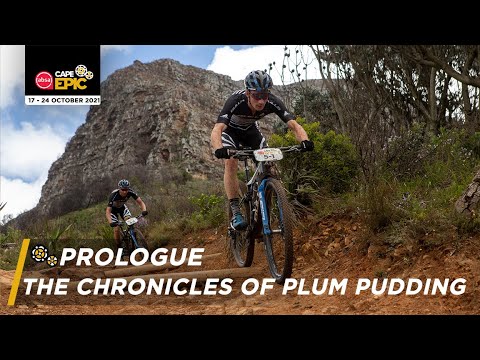