With a profile that resembled the jawline of a ragged-tooth shark, Stage 5 of the Absa Cape Epic took riders on a route that showcased the brutal but amazing Wellington trail network.

Take five major climbs for a cumulative 2900m of vert; squash it into 84km; throw in some rolling rain squalls, wind and single-figure temperatures and you have a recipe for a major physical and psychological challenge.

Hans Becking and José Dias of Buff Scott MTB Racing embraced the rain and pain to claim their second stage win in a row.

Like Stage 4, Buff Scott MTB then made their break on the final climb up Aap d’Huez. None of the other teams could respond. Buff Scott MTB raced ahead, effortlessly riding down Full Monty, the Land Rover Technical Terrain. Not wanting to jeopardise their overall lead, NinetyOne-songo-Specialized flowed smoothly through the descent.

“It really helped that I knew the whole route,” Beers said afterward. “Knowing what to expect makes it easier. It was good to just pace ourselves and flow a bit better - that made for really nice riding.”

The battle for the Absa African Jersey in the women’s race is also once again proving the importance of team bonds in The Race That Measures All.

Stigger and Frei continued their dominance of the women’s race, winning their sixth stage (one Prologue and five stages). For the NinetyOne-songo-Specialized (who now enjoy a 29-minute lead over their nearest rivals on GC) it was a chance to ride freely and express themselves on the trails.

A team that didn’t have the luxury of flowing through the trails and had to leave it all out there was the {type}DEV Nanotime outfit of Tristan Nortje and Wessel Botha. The young guns had to chase super hard after a metal rod hooked onto Botha’s bike breaking the seat post. “We had to limp to the tech zone, change the seat post and then chase back from there,” Botha said. “Tristan was super strong helping me where he could and it was just a case of trying to limit our losses.”

The team showed a lot of character to fight back and finish strongly, eventually losing 02:52 to Pyga Euro Steel in the battle for the Absa African Jersey.

The battle for the Absa African Jersey in the women’s race is also once again proving the importance of team bonds in The Race That Measures All.

“It’s very special racing with Mariske (Strauss), particularly at the Cape Epic,” said Candice Lill of Faces CST. “We have been competing against each other for so long and have always been hesitant to team up, but our teamwork together this week has just shown what we can achieve, and shows the power of when women unit together, and what can come from that."

Strauss was also full of praise and enthusiasm for her race partner. “It’s very special to be racing in the Absa African Red Jersey, and especially to be able to do it with someone like Candice. It’s been wonderful to share this week with her, and I hope that our ride can help inspire the next generation of female South African mountain bikers.”

Make no mistake about it, while the pros are what the world sees, every rider who completes a stage as tough as today and doesn’t flinch at the forecast for Saturday, is an inspiration. 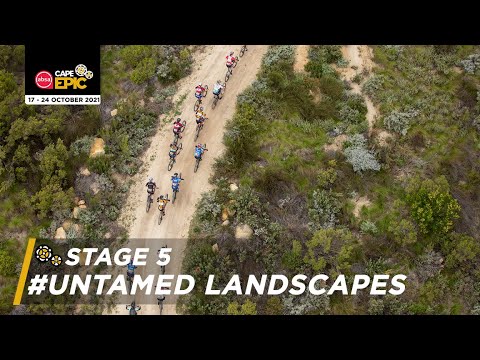