Not since 2013 has Stage 1 of the Absa Cape Epic been less than 100-kilometres. Not since 2010 has the event had a stage around Ceres. Never has it run in October. The exceptional Eselfontein trail network provided, perhaps, the perfect canvas on which to paint the unique, once-off seasonality. “It was completely different to March,” said five time Absa Cape Epic winner Karl Platt, who, with partner Alban Lakata, leads the Dimension Data Masters category. “If it was March, the trails would’ve been dry, hot and super sandy with no grip at all. It would’ve been super demanding.”

“Today it was quite compacted and was rolling really nicely - the trails were in perfect condition.”

Eselfontein features various highlights, but the mainstay of the 98km route over 1850m of climbing were undoubtedly the Dead Man Walking climb (which was the race’s first Dimension Data Hotspot) as well as the singletrack from the summit, Pipeline - the Land Rover Technical Terrain. Pipeline is a 3-kilometre challenge with rocks haphazardly jutting out from the hard-baked clay surface which required absolute concentration. In fact riders had to keep their wits about them throughout.

The technicality of the route, as well as the heat meant that for the herd of Bulls, category jersey contenders, serious amateurs and newbies alike, it was no day at the beach.

The various river crossings were much higher than they would most probably have been in March. For the likes of Ariane Lüthi who finished second in the women’s category it threw the odd curveball.

“There was a lot more water than I’m used to in Africa,” said the ex-Stellenbosch local. “Mostly in South Africa you can go through all the rivers without a problem but some were a little more challenging today,” she said. “They made for quite a refreshing break actually!”

Lüthi and Robyn De Groot finished behind debutantes Sina Frei and Laura Stigger (NinetyOne-songo-Specialized), who led from start to finish to retain their orange jerseys.

Further back the Team Stadio pairing of Beauty Ngobese and Remofilwe Moeketsi who are tackling the 2021 event under the banner of Stadio, also enjoyed the challenge of the trails. “Since I started riding in 2018 it (Absa Cape Epic) got onto my bucket list,” said Remofilwe. “I love stretching my physical and mental abilities. And also to show that we are here as black females; yes our generation is getting onto the wagon a bit late, but for future black stars to know that now it is possible. It is to inspire that one day having black people on podiums will be a norm.”

Today, during Stage 2, the riders tackle the Queen Stage into the Witzenberg Valley over 96km with 2100m of climbing. The route features some of the private trail network on the apple and pear farms of Sakkie and Hannes Hanekom (Santa Cruz Masters). “It is beautiful, flowing trails but rough sandstone terrain,” says Sakkie, whose build team has been responsible for much of the crafting of the private trails on the property. “Expect a little bit of everything really - the diversity will be nice but it also makes it really tough - there are a lot of short, hard climbs which is going to make it really difficult.” 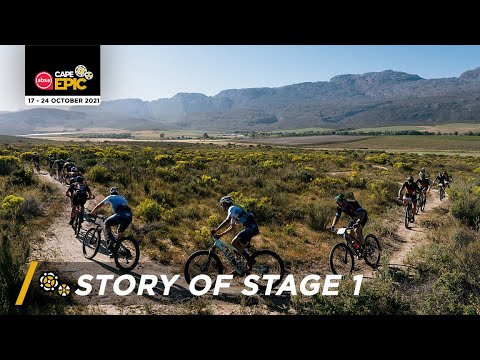