Welcome to the the wine hub of Somerset West and Lourensford Estate, one of the premier wineries of what we call the Boland – the wine region that lies across the relatively barren (agriculturally speaking) Cape Flats and “up-country” from Cape Town.

Somerset West is maybe a subordinate locale of the winelands, compared with the better-known appellations of Constantia, Stellenbosch, Paarl and Franschhoek. However, it includes one of the (some would argue the) grandest of all grand cru estates in South Africa, in the guise of Vergelegen that reposes next door to Lourensford. In fact that latter was once part of the former, its name and importance denoting a ford on the Boland wagon route across the Lourens River. You will see the river only in late summer when it is but a small stream; but wait for winter and the lashing rains of that season and you’ll find a torrent there.

The town sprung up around Vergelegen, a wine estate that was established by Dutch East India Company Governor Willem Adriaan van der Stel back in 1700. The name means “located far away” and refers to its then distant siting from Cape back when it was a one day horse ride, or a two day wagon trip, into a land still beset by all manner of wild beasts including not only various species of antelope, leopards, hyena, hippos in the rivers and even the occasional elephant herd. The mountains that create the spectacular backdrop to the stage are now a nature reserve. Although much of the big game is gone, it is still the preserve of Cape mountain leopards: you are unlikely to see any, but they’ll see you.

The defining feature of the region is the Cape Folded Mountain belt, without which it hardly needs to be said there would be no Absa Cape Epic.

The earliest traces of human activity in the Hottentots Holland Valley are to be found at Grootnek and Uitzicht, two locations deep in the heart of Lourensford Estate.

In times past this area was never the domain of large game herds (there is very little grass or trees), but it is the world’s hot spot for tortoise diversity

Much of the world’s business bypasses the sleepy Cape, which is just fine for the locals who enjoy world-class vintages at ridiculously low prices. Cheers!

The best restaurants in and around Somerset West will be found on the various wineries, such as The Stables seen here on Vergelegen (situated far away – from Cape Town) estate.

Very unlike his much admired father Simon, who was governor before him (and after who Stellenbosch is named), Willem Adriaan showed himself to suffer “greed and extravagance”: that splendid Cape-Dutch manor house was built with company money destined for developing the colony. This led to a revolt by the local burghers, resulting in the governor being recalled less than a decade later. The property was then subdivided and auctioned off, one of the parcels being Lourensford sheltering in a corner between main Hottentots-Holland range and the spur known as the Helderberg (clear, or bright, mountain).

The surrounding town was established around century later during the governorship of Lord Charles Somerset, soon after Britain had captured the Cape enclave from the Dutch. The English seemed determined to outdo their predecessors when it came to naming things: there is also a Somerset East, and last year on the Epic we met the towns of Wellington and Wolseley, along with Tulbagh, each named for some colonial big wig (as well as Gouda that was named for a big cheese). Then there is Sir Lowry Cole, after whom the pass that carries the N2 national road over the mountains – which we’ll meet again later in this race.

Somerset West is an epicenter of mountain biking trails in the region, with numerous starting venues (apart from the Epic base camp) including Dornier, Southey Vines, Oldenlands and Silvertree Gorge among them. The summit of the Helderberg Dome is a favourite destination of serious hikers, but you can also just amble around in the Helderberg Nature Reserve to acquaint yourself with the local fynbos (fine bush) vegetation – a UNESCO World Heritage Site, but more of that later. The Cape Epic Prologue route follows the Lourensford Loop Trail on the steeply angled eastern slope of the Helderberg, a popular casual and race venue of the local dikwiel (thick tyre) commandos – as we call off-road riders.

Somerset West is an epicenter of mountain biking trails in the region, with numerous starting venues (apart from the Absa Cape Epic base camp) including Dornier, Southey Vines, Oldenlands and Silvertree Gorge among them.

Set within 4 000 hectares of forest, fynbos, fruit orchards and vineyards, the beautifully-tended garden at Lourensford boasts a collection of permanent sculptures which form part of the local art route.

Across the N2 freeway from the race village you’ll find the Cheetah Outreach Centre off Firgrove Road. The cheetahs there are there to introduce visitors to Africa’s most endangered big cat. Before we were born there were an estimated 100,000 of these magnificent animals prowling the savanna grasslands. Today there are just about 6,000 of them, but so inbred now that they are all basically cousins. The centre’s real aim is to breed and train Anatolian sheep dogs, which are used to keep wild cheetahs away from farm stock (sheep and goats mainly) in the areas where they co-exist, thus preventing predation and subsequent revenge killings by farmers. Although the walking-with and petting aspect is dubious, the cause in unquestionably honourable.

Most of the best restaurants here are on the various wine farms, including Waterkloof and Vergelegen, which includes fine dining (The Stables) as well the option of a picnic on the lawns. The avenue of camphor trees in front of the Vergelegen manor is among the country’s registered champion trees. In town you’ll find Italian, Mexican, Asian and seafood eateries, as well as good old-fashioned cafés and steakhouses (this being the domain of serious meat eaters).

Lourensford itself boasts the Millhouse Kitchen, Abru artisanal brewery, a coffee roastery, very popular Friday evening farmers market, and even offers a “vinfari” (wine safari). If you cannot find your groove here, you’ve likely got stuck in a rut.

There they stand, magnificent in their many-faceted variety, Gothic in appearance and temper, and utterly indifferent to your suffering.

Helderberg Nature Reserve offers hikers and bikers both easy and challenging trails, or simply a chance to stop and smell the flowers.

The defining feature of the region is the Cape Folded Mountain belt, without which it hardly needs to be said there would be no Absa Cape Epic. There they stand, magnificent in their many-faceted variety, Gothic in appearance and temper, and utterly indifferent to your suffering. The first Cape Epic back in 2004 set off a craze for stage races across South Africa, one of which is the Wines2Whales route that you’ll meet on Stage One.

The Mountains that dominate the skyline are known as the Hottentots-Holland. The first Dutch people to set up home and shop on the shore of Table Bay looked at the mountains that hemmed them in with fear and foreboding (as you can imagine they would coming from a place that is pancake-flat and the wildest animal is a cow) and called them the Mountains of Africa. When they finally did pluck up the courage to venture across the Cape Flats they discovered deep, fertile valleys where the indigenous Khoi (who they called Hottentot), people fattened their cattle (many sold to fearful and naïve Dutch and stolen back). The tract of peaks from Stellenbosch south to Cape Hangklip was thereafter known as the Hottentots-Holland – home of the Hottentots.

Once there, it was not long before wagons were being dragged up and over the mountains to seek new pastures, up a game trail they learned was called the Gantou (w) Pass, thought to mean the path of the eland. By the early 19thcentury some twelve wagons a day was ascending or descending the trail, and it is said one in five sustained damage in the process. While you struggle up that slippery slope, just imagine trying to coax a team of sixteen or eighteen oxen dragging a wagon weighing around a ton, up there. Then put your head down and race your way to Elandskloof. 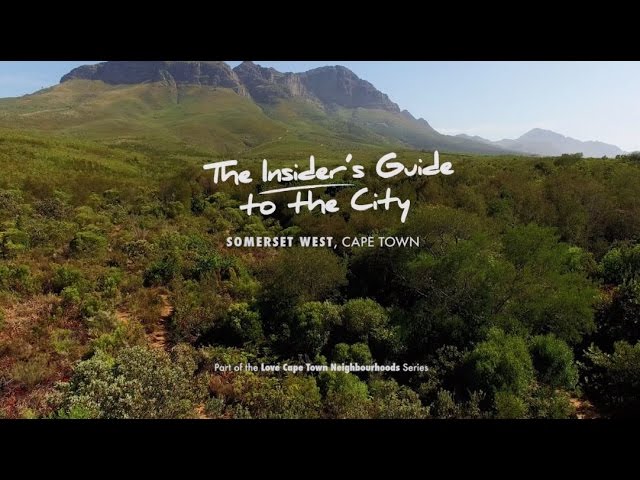 Strand (literally “beach”) is one of the most built-up seaside locations of the region, but even a bad day here is a good one.

Getting to know Lourensford Wine Estate